Go to the U of M home page

To foster and promote research in virology, virology education, and translational applications 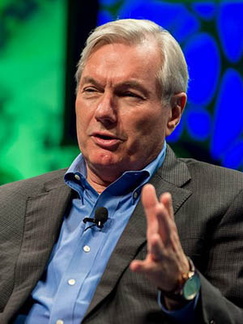 Dr. Osterholm is Regents Professor, McKnight Presidential Endowed Chair in Public Health, the director of the Center for Infectious Disease Research and Policy (CIDRAP), Distinguished Teaching Professor in the Division of Environmental Health Sciences, School of Public Health, a professor in the Technological Leadership Institute, College of Science and Engineering, and an adjunct professor in the Medical School, all at the University of Minnesota. He is also a member of the National Academy of Medicine (NAM) and the Council of Foreign Relations. In June 2005 Dr. Osterholm was appointed by Michael Leavitt, Secretary of the Department of Health and Human Services (HHS), to the newly established National Science Advisory Board on Biosecurity. In July 2008, he was named to the University of Minnesota Academic Health Center’s Academy of Excellence in Health Research. In October 2008, he was appointed to the World Economic Forum Working Group on Pandemics.

In addition to being awarded a university Regents Professorship in 2015, Dr. Osterholm is also a McKnight Presidential Endowed Chair in Public Health. In addition, Dr. Osterholm has received numerous honors for his work, including an honorary doctorate from Luther College; the Pump Handle Award, CSTE; the Charles C. Shepard Science Award, CDC; the Harvey W. Wiley Medal, FDA; the Squibb Award, IDSA; Distinguished University Teaching Professor, Environmental Health Sciences, School of Public Health, UMN; and the Wade Hampton Frost Leadership Award, American Public Health Association. He also has been the recipient of six major research awards from the NIH and the CDC.

Dr. Osterholm has been a national leader detailing the growing concern regarding the use of biological agents as catastrophic weapons targeting civilian populations. After 9/11, he served as Special Advisor to Secretary Tommy G. Thompson on issues related to bioterrorism and public health preparedness. Dr. Osterholm serves on the editorial boards of five journals. He is a reviewer for 24 additional journals, including the New England Journal of Medicine, the Journal of the American Medical Association, and Science. He served on the CDC’s National Center for Infectious Diseases Board of Scientific Counselors from 1992 to 1997; and is former president of the Council of State and Territorial Epidemiologists (CSTE). Dr. Osterholm served for 24 years (1975-1999) in various roles at the Minnesota Department of Health (MDH); the last 15 as state epidemiologist and chief of the Acute Disease Epidemiology Section. He currently serves on the IOM Forum on Emerging Infections. He has served on the IOM Committee on Emerging Microbial Threats to Health in the 21st Century and the IOM Committee on Food Safety, Production to Consumption. He was also a reviewer for the IOM Report on Chemical and Biological Terrorism. As a member of the American Society for Microbiology (ASM), Dr. Osterholm serves on the Public and Scientific Affairs Board (where he chairs the Public Health Committee), the Task Force on Biological Weapons, and the Task Force on Antibiotic Resistance. He is a frequent consultant to the World Health Organization (WHO), the National Institutes of Health (NIH), the Food and Drug Administration (FDA), the Department of Defense, and the CDC. He is a fellow of the American College of Epidemiology and the Infectious Diseases Society of America (IDSA).

Dr. Osterholm is the author of more than 300 papers and abstracts, including 20 book chapters.

Didn't find what you were looking for? Have a correction or a compliment?
Submit website feedback, report broken links.